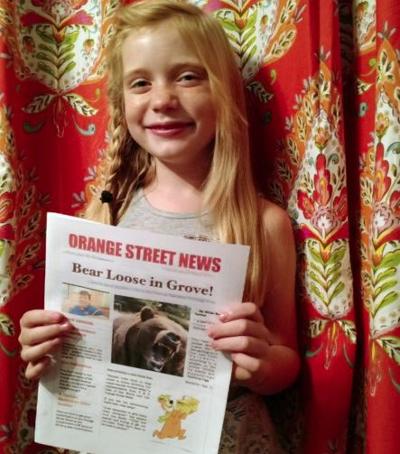 She is only nine years old but is already a famous journalist and publisher. Her name is Hilde Kate Lysiak and she hails from Orange Street in the Pennsylvania town of Selinsgrove. Oh, and she is the publisher of the Orange Street News which also has a YouTube channel. She has been running the newspaper since she was seven years old. By the time she reached eight years old, she was already tracking down crime, attending town council meetings, and establishing sources. This past Saturday, Hilde received a confidential tip from one of her sources that there was some heavy action going down over on Ninth Street.

So, as any seasoned journalist would do, Hilde grabbed her pen, notebook and camera and raced over to Ninth Street. She managed to get the details of a murder scene and investigation and quickly made a post online completely scooping all of the competition. After posting, she headed back out into the streets to grab interviews with neighbors, law enforcement and with anyone that may have known anything about the homicide.

Once she had what she needed, she hustled back to her house and ran a full length story online with the blistering headline of “Exclusive: Murder on Ninth Street!”. Not only did her story appear even before the local daily ran with it, but she had the innate ability and skill to record a video from the murder scene, get it up online, and assure her many readers that she was hot on the trail of this story and that more was sure to come.

Of course, as it tends to be with highly remarkable people, especially if they are quite young, Hilde was met with a hurricane of criticism from all parts of town including the former mayor as Facebook simply lit up at what many viewed as Hilde’s audacity. Her father is an author and a former reporter at The New York Daily News who would take her around the newsroom and who helped her put the newspaper together at the very beginning. 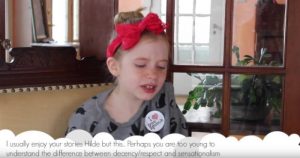 The former mayor of the town proclaimed, “I am disgusted that this cute little girl thinks she’s a real journalist. Whatever happened to tea parties?”

Another anonymous Facebook comment read, “9 year old girls should be playing with dolls, not trying to be reporters.”

Hilde, not to be intimidated, gathered up the comments and took to YouTube where she read them all aloud. After she finished reading the comments that had poured into her, she looked up at the camera and made her final statement.

“I know this makes some of you uncomfortable.” she began, “and I know some of you just want me to sit down and be quite because I am 9. But if you want me to stop offering news, then you get off your computer and do something about the news. There. Is that cute enough for you?”

If your PC has a digital entitlement, Microsoft keeps a record of your right to run Windows 10 on its servers. The good thing about this system is there’s no product key to lose. windows 10 pro key
It has a graphical user interface software, games or encoding applications. Plenty of users from around the globe are employing this Windows 10 activator on the PC, Mac, Windows, laptops. With this genuine activation, you can upgrade Windows if you want and you could set up any software or software straight from the Microsoft store without getting found. windows 7 professional 32 bit key
Click the entry for your version of Microsoft Office to reveal the key and other information about that installation. windows 10 activation key
Like everything good in this life this program is not FREE. Single license costs $29.95. office business 2016 key
Results can saved to HTML, TXT, PDF, RTF, Word, Excel, CSV, XML files, or simply sent to printer. Program got simple and intuitive user interface but with solid amount of options. office 2010 100% working product key
Although you don’t need to purchase Office to use it, you do need a valid Office 2010 product key to use this product. windows 7 activation key 64bit
windows 7 ultimate 64 bit product keyFollowing are some of the awesome features of Windows 10 that you will be able to enjoy after activating it using Windows 10 activator