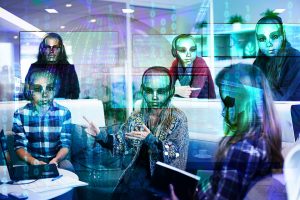 BY KEVIN SAWYER – During a recent meeting of the World Economic Forum in Geneva, a report was issued that declared another five million human jobs will be lost to robots over the next three to four years. The report warned that technology, especially artificial intelligence, is moving the world toward a “fourth industrial revolution” and that humans may not be able to recover from it.

Hundreds of thousands of human workers have already been replaced in many industries and it just may be the tip of the proverbial iceberg. Recently, the Chinese manufacturing behemoth, FoxConn, replaced 60,000 workers at just one of its factories with robots. The Forum suggests that robots will be reaching out into every sector of world economies and not just in manufacturing and in automation.

In addition, the World Economic Forum states that another seven million human jobs could go by the wayside due to redundancy and automation. These upheavals will be mostly happening in the top 15 industrialized and first world nations including the United States, China, India, Japan and Germany.

Bloomberg has estimated that up to 70% of the job losses will happen in traditionally white collar office jobs and administration while Fortune magazine has reported that there is already a robot replacement revolution happening in the areas of medical surgery, law office functions, data gathering, financial analysis and even in sports writing.The mindset of business owners and entrepreneurs seems to be that they will cut huge swaths out of their operational costs if they don’t have human workers. Robots don’t need health insurance, don’t get pregnant, don’t require sick days or vacation time and don’t have to leave early to take little Tyler and little Ashley to their soccer games.

The new employer mindset can probably be summed by by a Russian entrepreneur in California who owns a company he calls Momentum Machines. It builds robot burger makers that can make 400 hamburgers and hour. Does he worry that people will be losing jobs? He isn’t worried about employee efficiency because, he says, he wants to “completely obliterate them”. A McDonalds in Phoenix is completely robot staffed and the managers are so excited because they say that the robots can work fifty times faster than a human.

Forget the silliness of demonstrating for a $15 an hour minimum wage. It isn’t going to happen. Even if it does in some places, businesses merely crank up the price of their products and services to cover the wage increases. It’s like people who think companies and corporations pay taxes and left leaning people who think we should raise their taxes. Companies don’t pay taxes. People do. Raise taxes on corporations, they will just raise their prices to cover it. So, in reality, your cost of living just went up.

Klaus Schwab, founder and chairman of the World Economic Forum concluded that, “Without urgent and targeted action today to manage the near-term transition and build a workforce with future proof skills, governments will have to cope with ever growing unemployment and inequality and businesses with a shrinking customer base.”