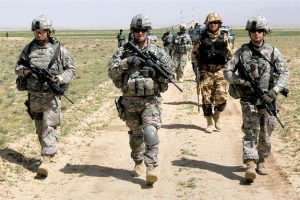 The U.S. Army said on Thursday, July, 9, 2015, they are aiming to cut 40,000 soldiers from their ranks over the next two years in order to achieve target workforce reductions.

During a press conference at the Pentagon, the Army’s Director of Force Management, Brigadier General Randy George said, “We’ll do as much as possible of this through attrition,” “But I may have…to look captains, majors, soldiers, in the eyes…and tell them we are reducing,” he added.

“Those are tough things to do but we do expect that that would happen,” George stated.

An estimated 17,000 civilians working for the army will also be cut under the reduction plan.

“Unfortunately under sequestrations and budget cuts, today’s announcement may not be the last,” George said, adding that the army could be forced to eliminate 30,000 more soldiers by 2019, bringing the total to nearly 420,000.

In the event of the significant reductions, the army would have to limit its deployments around the world to be able to continue to respond to emergency situations, he warned.

President Obama has promised to stop automatic budgetary cuts, but will have to reach agreement with the Republican majority in Congress to do so.