20 foreigners, including 11 Britons (2 with dual citizenship in South Africa), 8 South Africans, and 1 Indian citizen have been detained in Mongolia by Chinese officials after being suspected of affiliation with a terror group. African charity Gift of the Givers stated that they were tourists.

“The Chinese… suggested that some members were linked to a terror group, to a banned organisation, to watching propaganda videos in their hotel room.”

They also stated that the group included some doctors and businessmen, with none of them linked to terrorism. 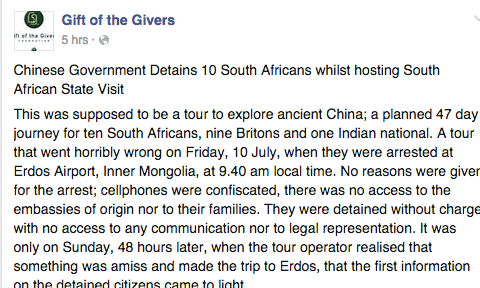 UK officials are “seeking further clarification” on the reason for the arrests, and British consulate staff have visited to provide assistance. Six of the Britons are expected to be deported soon.

According to the BBC:

Mr Ramaphosa arrived on Sunday for his five-day visit.