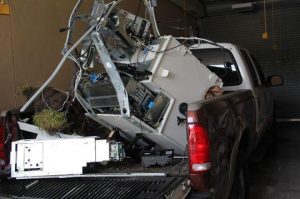 Police say two men in Clewiston, Florida used a backhoe to steal an ATM machine from a CenterState Bank in Winter Haven. The two men were able to dislodge the ATM machine and managed to load it into their getaway truck, however they didn’t make it far. The duo was pulled over a short time later after an observant police officer on routine patrol spotted the large ATM machine in the back of the truck.

The men, Francisco Hernandez, 54, and Jesus Antonio Sanchez, 50, claimed they were driving around looking for scrap metal and weren’t sure how the ATM ended up in the back of their truck. Police later determined the two stole a backhoe from a construction site near the bank, which they used to remove the ATM machine.

The two men were booked in Polk County Jail on charges of grand theft.