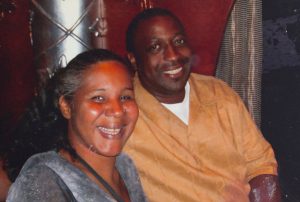 Mr. Garner and his wife, Esaw, during a family vacation in 2011.
Photo Source:
nytimes.com

That’s the amount settled on by the city of New York to resolve the wrongful death claim of Eric Garner,43, by Staten Island police.

It’s just a few days until the anniversary of Garner’s death. This agreement headed off one legal battle. There’s more to go. A federal inquiry into Garner’s killing, as well as others on the state and local level, remains open.

Since July 17, 2014, the atmosphere in New York city has been extremely tense.

Mr. Garner, unarmed, standing on a sidewalk, was accused of selling untaxed cigarettes.

After attempting to arrest him, one officer used a Police Department prohibited chokehold. Hoping to subdue him. The medical examiner has determined this as his cause of death.

“This is not about people getting money,” Mr. Sharpton said on Monday. “This is about justice. We’ve got to restructure our police departments and how we deal with policing nationwide.”

In the eleven months since since Garner’s death, there was the Michael Brown shooting and others–more recently a death in Tuscaloosa after a man was pepper sprayed by police.

Minority communities have dubbed this “a modern day lynching” and it has sparked off debated about policing and racial discrimination.

In New York, most of the fatal encounters since 1990 (involving New York Police Department officers).did not lead to criminal charges.

Reverend Al Sharpton spoke out on this issue.

“This is not about people getting money,” Mr. Sharpton said on Monday. “This is about justice. We’ve got to restructure our police departments and how we deal with policing nationwide.”

This is an argument that has gone to the highest level as President Obama has gained bi-partisan support in coming up with a “better system” as far as police relations.

This settlement certainly can not bring Garner back and it doesn’t bring a resolution to his death and others.