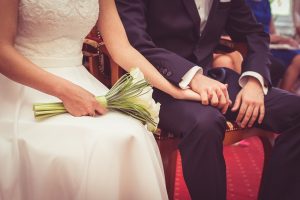 BY KEVIN SAWYER – Sustaining a relationship of any kind is always difficult because its success implies hard work and marriage may be the most challenging relationship of all. While more than half of all marriages never make it to “until death do we part”, recent research has turned a focused eye on why marriage is so difficult especially in these volatile and uncertain times.

Modern marriage has long been dissected by couples therapist Esther Perel and her observations seem to support recent research done by psychologist Eli Finkel at Northwestern University. The first challenge, it seems, to to try and understand why people get married in the first place. The reasons are not what they were, say, 200 years ago.

“Marrying because you are deeply attracted to someone,” says Perel, “and have fallen deeply in love with someone and are lusting after that person – all of these are rather recent ideas.”

Prior to the 20th century, and certainly before the 19th century, people married for far different reasons than people do these days. These days, for the most part, people decide to get married because they believe they have found true love, or a soul mate, or they want children and the white picket fence in suburbia. This idea seems to have truly emerged only since 1965 or so. Prior to that, much of the time marriage was made mainly because the woman sought safety and the man sought respectability. Marriages tended to be one where both partners could combine and work together for the betterment of the both of them both in social and in economic terms.

Today, things are not so clear as they used to be. There use to be clear lines of delineation with regard to what distinct responsibilities would be handled by the husband and what responsibilities would be handled by the wife. Though such distinctions and division of labor seems rather archaic and outrageous to many these days, the model actually worked pretty well. Both partners were valued for those things they provided the relationship and there was never any confusion about who was responsible for what.

Perel explains, that even in today’s marriages, “we want companionship, family life, social status, and respectability and economic support. Now, we want you to be my best friend and my trusted confidant and my passionate lover to boot and we live twice as long. That’s the model.”

The major problem seen by both Perel and Finkel is that people expect their partners to fulfill all of their physical and emotional needs. This, of course, is such a high bar that most are doomed to failure. How is that even possible to do? Have expectations been made so impossibly high that marriage is doomed to fail even before it happens?

Much of how modern marriage is looked at stems from the concept of Romanticism which was all the rage during the 19th century. Philosophers babbled about it and novelists hoisted romantic love up onto the proverbial pedestal where it sits teetering to this day. Men and women, too, seem to marry for different reasons and needs which often go unrecognized by the partner. Add all of this to the frenzy and cyclone of motion and distraction that is life in the early 21st century and you may have a recipe for disappointment and frustration. Idealized expectations tend to be beaten down very quickly by the reality of day to day survival.

What both researchers suggest that is that each partner must be aware of the effort that the other is making with regard to fulfillment and support. Gratitude, too, is central to success. Being grateful for what your partner does do goes along way with regard to personal fulfillment as well as making your partner feel wanted and loved. Also, they suggest that you spread yourself out with regard to personal satisfaction with hobbies, friends and pursuits that will help bring you satisfaction without placing the entire burden for your happiness on your partner.

Your happiness is your responsibility and your burden. The secret to truly understanding that is to realize that it really doesn’t come from the outside.