ABC’s Once Upon A Time has guest starred several Disney princesses (not counting the two main characters Snow White and Belle).

Last year’s inclusion of Anna and Elsa had me and my seven-year-old niece watching the show religiously.

This year’s is even better.

We can expect to see Brave’s Merida this Fall!

From the trailer, I was a bit disappointed that she was a little too “pretty”. (I was hoping for more in the way of crazy, unruly hair). Just as long as she’s tough and has a Scottish accent, I think I can let that one slide.

There’s a part of me that hopes she will be slightly evil. Or maybe she’ll have a cute story line with Robin Hood, where she beats him miserably at archery.

There doesn’t seem to be much in the way of spoilers. From what I hear, you can’t even trust the teaser trailers.

Nonetheless, I can’t say that I’m not excited.

Who knows in the future, we might even see my favorite Disney Princess–Pocahontas.

(Though I’m sure that would be hard to navigate without causing massive amounts of controversy.)

The new season premiere’s on September 27. 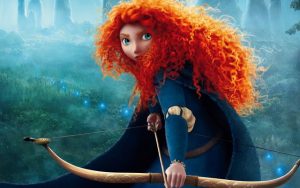