One class chose Auburn University and uploaded a video to YouTube.

In the video, students recited the Auburn creed, gave stats about Auburn enrollment, talked about history and traditions, and even sang the fight song.Elementary students present Auburn University

Jay Jacobs of AU saw the video and scheduled a visit to Schmid. Auburn University visit

With the students giving their rapt attention, he spoke on what it meant to be a part of the Auburn family and invited out special guest Bo Jackson.

It seems Jackson, Jacobs, Aubie (the Auburn mascot), and Brian Keeter had many special surprises for the kids.

Jackson, whose friend owns the Boston White Socks, told the kids that he “would take you on the field”.

Jacobs and Keeter then told the kids that they were invited to Auburn for a campus tour to meet professors and go to an Auburn football game.

Students and teachers alike expressed gratitude for their visitors and an excitement for all their upcoming adventures.

Schmid is a Title I school where the majority of its students live below the poverty level and have never been out of Chicago.

Jackson spoke to the kids about the possibilities for their futures. He mentioned professions such as doctors, school teachers, and one child’s face even light up as he said “president”.

Even this Crimson Tide girl has to give a big “War Eagle” to that. 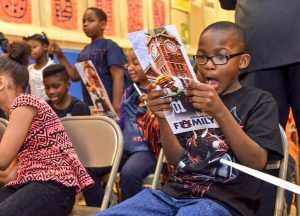