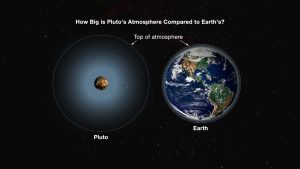 Head on over to NASA TV, you’ll see the last two daily briefings from the New Horizons/Pluto Missions.

What will we see? The atmosphere (pardon the pun) is abuzz with excitement.

There are even cool campaigns such as the “find your pluto time ”  tool on Nasa’s website.

Using this tool, you impute your current location and then you are given a time where you live that is the same equivalent of brightness as the brightest time on the former planet.

Then you are asked to take a picture and send it to Nasa using the hashtag #plutotime.

This mission has been 9 plus years in coming and July 14 doesn’t seem to be getting here fast enough.

We are two days away from seeing Pluto the closest that it has ever been seen in history.

This is also the first time in history, that we will have a view from behind Pluto.

Over the next few days, New Horizons will make its final approach. Scientists are now taking optical navigation data to check on the process of the probe. Tomorrow is the last day for daily briefings and then comes the big event.

New Horizons will then study the images picked up from the probe on July 15th will release info to the general public.