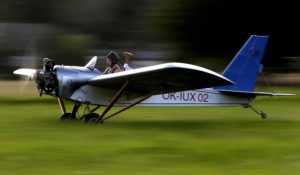 BY KEVIN SAWYER – Can you believe that someone would consider a 14 minute commute to work to be too long? Well, Frantisek Hadrava did and decided to do something about it. What did he do? Why, he built an airplane of course. Now he flies to work and he has, remarkably, cut his morning commute time in half.

Hadrava, 45, of the Czech Republic was just tired of driving the 14 minutes every morning to get to his 6 AM locksmith job at a local factory in his hometown of Zdikov. He has always loved planes and the thought of flying since he was a little boy so he decided to build his own small airplane and see if he could start flying to work in an effort to save some time. 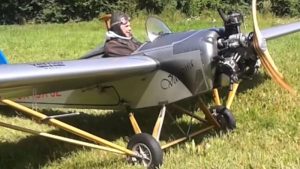 He spent two years building an extremely light mini-max plane of American design and now his commute to work only takes him seven minutes. So now, if it isn’t snowing or raining, he simply piles himself into his little plane and heads to work in half the time of what his driving commute took. It is an open cockpit style as he doesn’t fly all that far up and it is powered by a three cylinder engine. 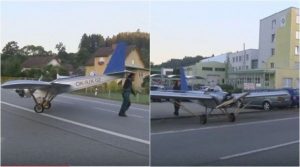 It cost him slightly over $4,000 to build and the plane can hit a top speed of 91 MPH. There is a small field, a meadow, right across the street from the factory so it makes it rather easy for him to fly into work. However, since he just can’t leave his little plane sitting in the meadow all day, he simply pushes it across the street and parks it one of the parking spaces in the company parking lot. It takes up four parking spaces but none of his co-workers complain. They think it’s rather cool that he flies to work.

“It takes me about 12-14 minutes by car,” said Hadrava. “By plane, it would take me around 4-5 minutes if I flew directly but I take a bit of a detour so I don’t disturb people early in the morning. So, it takes around 7 minutes.”