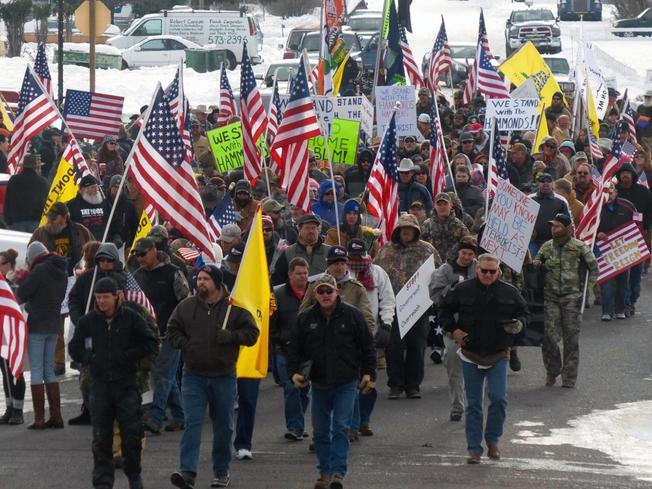 Armed militia stormed and occupied a national wildlife building in Oregon on Friday.

The occupation happened after 300 militia and local citizens protested the ruling that two ranchers, father and son Dwight Hammond Jr. and Steven, will be returning to prison on Monday, according to The Oregonian.

One of the occupiers, Ammon Bundy, told the newspaper that they’re not looking to hurt anyone, but if it might come to that if police try to remove them. They broke into the refuge’s unoccupied building and have refused to leave.

“We’re planning on staying here for years, absolutely,” Bundy told the news outlet in a phone interview. “This is not a decision we’ve made at the last minute.

“The best possible outcome is that the ranchers that have been kicked out of the area, then they will come back and reclaim their land, and the wildlife refuge will be shut down forever and the federal government will relinquish such control,” he said.

However, CBS local affiliate KOIN6 reports that the Hammond family are not taking part in the take-over.

“Neither Ammon Bundy nor anyone within his group/organization speak for the Hammond Family,” the Hammonds’ lawyer W. Alan Schroeder reportedly wrote to Sheriff David Ward, according to the news station. CBS reports that Steven Hammond was seen greeting protesters with his wife before the take-over took place.

According to CNN, Bundy is the 40-year-old son of Nevada rancher Cliven Bundy who drew national attention last year after staging a standoff with federal authorities after a Bureau of Land Management dispute.

Bundy, along with his two brothers, are supporting a pair of ranchers who will be beginning their second federal prison term on an arson conviction, according to KTVZ.

The militia groups are protesting a judge’s ruling that the two ranchers served too little time for setting fires that spread to government lands they leased to graze cattle.

According to CBS, Cliven said he wasn’t part of the new protest.

“That’s not exactly what I thought should happen, but I didn’t know what to do,” he said. “You know, if the Hammonds wouldn’t stand, if the sheriff didn’t stand, then, you know, the people had to do something. And I guess this is what they did decide to do. I wasn’t in on that.”

KTVZ reports that the Hammonds said they lit the fires in 2001 and 2006 to reduce the growth of invasive plants and protect their property from wildfires. They were convicted of the arsons three years ago and although they served time, a judge ruled that under federal law they must return to prison and serve another four years each.

“I’m going to prison for five years for 127 acres? Seems like a bit of an overkill to me,” Dwight Hammond told reporters outside his home on Saturday. “It isn’t my decision, obviously. It’s a sentence.”

Dwight has said he and his son plan to peacefully report to prison Jan. 4 as ordered by the judge.