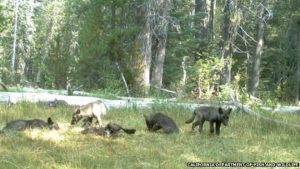 The California Department of Fish and Wildlife found a pack of five gray wolf pups and two adults in Northern California, the first wolf pack to be found in the state since 1924. The wolves are named the “Shasta Pack”, after Mount Shasta in Siskiyou County.

Earlier this year, a lone wolf was spotted in California. It is believed to be associated with the Shasta Pack.

During the 1800’s and 1900’s, wolves were hunted to near extinction by livestock owners in the western US. Gray wolves have been considered an endangered species in the state since 1973.

While officials say that the wolves do not pose a direct safety threat, they also recommend that humans do not approach them.