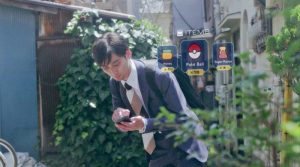 BY KEVIN SAWYER – Like the smartphones it is being played on, Pokemon Go has become such an intense addiction it seems it can only compare to the destructive and mind numbing addiction of crack cocaine. People are being killed walking into traffic. Romantic relationships are imploding. People are losing their jobs. People are being robbed and beaten by criminals augmenting the game to lead them into traps. One person was actually stabbed while playing and refused medical treatment because she had to keep playing while another was led to the front door of a Hell’s Angels headquarters. The Boeing company had to ban it because people were so addicted that no work was getting done. The app has been downloaded more than Snapchat or Tinder.

And, the Pokemon Go zombies are everywhere…

So, how does science and psychology explain the the almost immediate and intense addiction that is plaguing most people who are playing the game? The answers may lie in two directions: augmented reality and the human love of collecting things. Some of it can also be put down to nostalgia as many remember fondly playing the original Pokemon game back during the 1990’s. 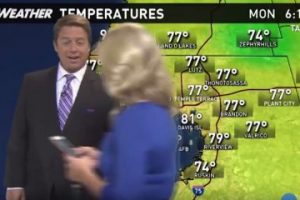 This news anchorwoman at WTSP in Tampa was so absorbed and addicted to her Pokemon Go that she walked right across a weather broadcast segment.

Augmented Reality (AR) was introduced in 2013 and it is, basically, placing non real elements into real elements. In other words, placing virtual things right in the middle of basic surrounding reality. The Pokemon actually appear right in your immediate surroundings which can be seen on the phone’s camera.

In 2013, a research team of psychologists studied the affects of AR and discovered that it was an extremely, almost immediate, addiction. They determined that being exposed to AR can be so addicting that people aren’t even aware that they have become addicted. Like crack cocaine. By the time you realize you might be addicted to it, it’s too late. AR studies have also found that children believe it to be real magic and can’t separate the virtual from the real.

“AR does not separate the user from his reality,” the study said. “but, instead, uses it and realistically transforms it. This affect can cause a high effect of surprise and curiosity in the users.” 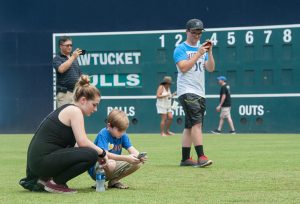 Science doesn’t really no why people love to collect things. There is much speculation but all that is really understood is that practically everyone collects something. Another psychological explanation put forth has been that in the small and isolated Pokemon Go world, you have control and that the chances of success are pretty great. Unlike the chances of success in the greater world, the outside world, of business, career, and romantic relationships.

Psychologist Russell Belk, who specializes in human collecting, said that, “There are several general motivations. One is that it’s a challenge. You want them all or as many as possible.”

The drive and addiction is to collect. There isn’t any real ending point to it all. The collecting addiction can go on forever. Belk said that, “You’re not striving for that closure as much as striving for bigger and better collections. That implies some social comparisons in that your collection is, in some sense, better than others.”

The controversy and the upheaval will continue. What can likely be said with certainty is that Pokemon Go has become a serious addiction for many and has begun to throw some of the real world into an upheaval that may be just too difficult to overcome or adjust to.