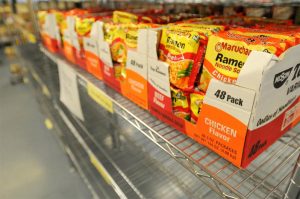 Apparently, the answer is rather simple. Sad, but simple. Prison food has deteriorated and become so almost inedible in most American prisons that inmates are resorting to Ramen noodles. Recent research out of the University of Arizona states that Ramen noodles have been making serious inroads as preferred currency in the state prisons in the country because the food is just so bad.

Michael Gibson-Light, a PhD candidate in sociology, and lead author on the study said that, “Prisoners are so unhappy with the quality and quantity of prison food that they receive that they have begun relying on Ramen noodles… as a form of currency in the underground economy.”

While long a food staple for American college students, Ramen was first created and introduced in Japan in 1900 and was a staple for Japanese troops for many decades including throughout all of World War Two. It was in 1958, however, when the owner of the Nissin Food Company, Momofuku Ando, created an instant form of the noodles to which only hot water needed to be added. The creation stormed America in the early 1970’s and has been a favorite since. The Nissin company takes in about $3 billion a year just from its worldwide sales of Ramen noodles.

Gordon-Light found in his research that Ramen has risen to dominance because of what he has named “punitive frugality”. Because state prison budgets have been slashed so enormously, current American prisoners have to take up more of the slack regarding their care. That, apparently, includes edible food.

Gordon-Light explained that Ramen was used to buy anything from toiletries to cigarettes. While researching, he once saw a card game going on where the prisoners were using Ramen bricks as chips. It has now become a sign of status in American prisons as to how many bricks of the soup a prisoner has stored in his locker. Someone who has as many as 20 packages at his disposal is considered a rich man indeed. Current worth of a brick of Ramen is equivalent to about $2. Not that long ago, an inmate could by a package for 20 cents but no more.

One prisoner confided to Gordon-Light that, ” It’s cause people are hungry. People will pay more when they need to write home to get more soups. Prison is like the streets. You use currency for everything.”

The challenge, Gordon-Light discovered, was the inmates being able to get access to boiling water. Something people take for granted in their everyday lives is an extremely difficult thing to come by in an American prison. One prisoner explained how it works. Many inmates just eat the noodles raw as if they were a piece of toast because they can’t get access to hot water readily.

Or, prisoners will resort to trying to use the tap water from their cells but find they have to keep tapping the button for around an hour just to get the water to a lukewarm situation. This prisoner told Gordon-Light that, “It’s gold. It’s literally gold. People will actually, and I hate to say this, but they’ll kill for it, believe it or not.”