With recent controversies surrounding censorship and what many believe to be hyper-sensitive P.C. policing, a new petition has made the rounds on social media.

Ryan Koch of Des Moines, Iowa started said petition and had this to say:

“I say all of us European Americans start protesting C****er Barrel. It uses an offensive slur and it is deeply offensive and mocks our long and proud heritage.

The name is offensive, their logo stereotypes European Americans as people who sit on chairs and lean against what appears to be a bourbon barrel, claiming we are all a bunch of alcoholics. Sure, they’ll SAY it’s a “cracker” barrel but everyone knows crackers don’t come in barrels, they come in bags and boxes!

Change the name C****er Barrel to Caucasian Barrel. After all, white people should have something to be offended by, too!”

With a substantial amount of shares on likes on social media, it’s obvious that with the Cracker Barrel petition that he has struck a nerve with some agitated Americans.

Of course, it shouldn’t be taken seriously.

“Cracker Barrel”, according to oxforddictionaries.com, is a late 19th Century reference to “the barrels of soda crackers once found in country stores”. This was a place where informal discussions would take place between customers. Just a homage to perhaps an overly romanticized yesteryear.

Upon entering Cracker Barrel (whoops! I said it!), it’s perfectly clear that it serves as a kind of restaurant to a forgotten past.

Americans as a people are good at such idealistic historical focus. And even better at capitalizing on it.

Any viewing of “Gone with the Wind” could tell you that. 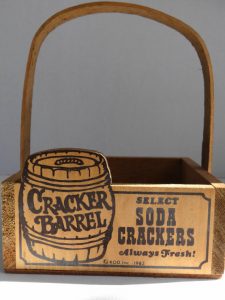