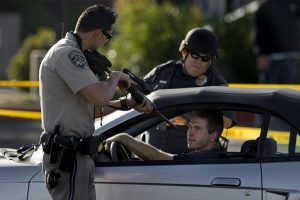 BY KEVIN SAWYER – Oklahoma police have been using a new device that allows them to steal people’s money whenever they decide to. The Oklahoma Highway Patrol has been using a machine called an Electronic Recovery and Access to Data or ERAD in government speak. The machine lets the police immediately scan a pre-paid debit card. If the police decide that you may be a criminal, they can just seize your money right then and there.

No probable cause. No due process.

There is a law known as the civil asset forfeiture law which allows police, or any government bureaucracy, to take anything you have, even your vehicle, your money and your house if they think you are involved in some manner of criminal activity. Some one just has to point a finger in accusation and you can lose everything. The judicial branch, which is the only thing standing between the Constitution and totalitarianism in America, continually ignores their responsibility and continually ignores that the U.S. Constitution exists at all.

Most lower income people tend to use the pre-paid debit cards as a bank account. They simply load money onto the card and use it like a portable bank account. In addition, there are many companies around the country that pay their employees with these pre-paid debit cards. Oklahoma police, especially their highway patrol, have been employing the device for over a year without people really knowing that they are doing it.

Are their Constitutional violations in play? Many believe so. The United States Constitution was originally created as a rule book for the government. For the most part, it spells out what the government can’t do and it was always expected that the judiciary would defend it since they are really the last bastion between a totalitarian government and citizen’s rights. Once the judicial branch abandons it responsibility to defend it, there is little recourse for the citizenry other than capitulation or violent and armed rebellion.

The director at the Institute for Justice, headquartered in Arlington, Virginia with branches all across the country, Matt Miller, has stated that, “I think that’s hugely constitutionally problematic. There’s a huge Fourth Amendment concern here, because you’re (the police) accessing someone’s bank account without a warrant.”

Of course, the U.S. Eighth District Court has already ruled that the police can use the ERAD machine.

While police everywhere have been trying to get access to people’s bank accounts without a proper Fourth Amendment search warrant, it hasn’t been for a lack of trying. Now, as in the past, the civil asset forfeiture laws have been a major money machine for government agencies as well as law enforcement.

Brady Henderson of the Oklahoma American Civil Liberties Union points out that it is legally a felony in Oklahoma to take someone’s pre-paid debit card and try and authorize any type of funds transaction without the express authority and permission of the card owner.

“Every trooper,” Henderson stated, “who would then do that on the side of the road would be committing a felony. It’s as if the highway patrol has never thought about thinks like that.”