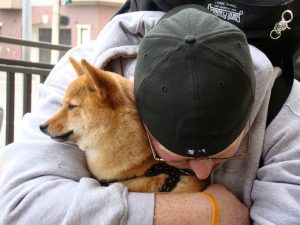 In a new article released in today’s Psychology Today, A psychology professor at the University of British Columbia is strongly suggesting that dogs don’t like to be hugged or cuddled despite the popular belief that they do. Stanley Coren, PhD, states that dogs are naturally curious animals and they tend to flee from potential danger rather than to confront it.

By people hugging their dogs, the animal feels trapped. They are scared and anxious because they are not being allowed to follow their natural dictates of being able to just run away. Coren writes that the dogs find the closeness to be not a pleasant experience. He tries to remind people that they are animals with animal instincts and not human children which is how most dog owners tend to treat their dogs.

Coren’s area of expertise is canine behavior and he states that dogs love to run because that is what they do and when they feel confined they may lash out and actually bite to free themselves. It is all a matter, he writes, of the anxiety levels produced by the human hugging and affection. 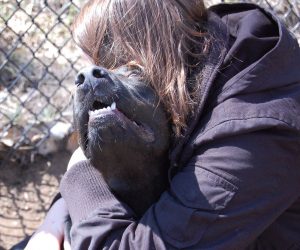 Coren studied more than 250 images that he found on the web and carefully tried to examine the anxiety levels of the dogs as they were being hugged. He was searching for tell tale signs like yawning, having their ears flat against their heads and a closing of the eyes so that they are barely even open. Coren said that most of the dogs will turn away from the person as if looking for an escape route.

After he studied all of the photos, Coren found that nearly 82% of the dogs in the photo were displaying at least one sign of high anxiety and looking for a way to escape the clutches of the human hugging them.Only around 7% of the dogs showed signs of being apathetic to the hugs.

Coren concluded that, “The internet contains many pictures of happy people hugging what appears to be unhappy dogs. It is clearly better from the dog’s point of view if you express your fondness for your pet with a pat, a kind word, or maybe a treat.”