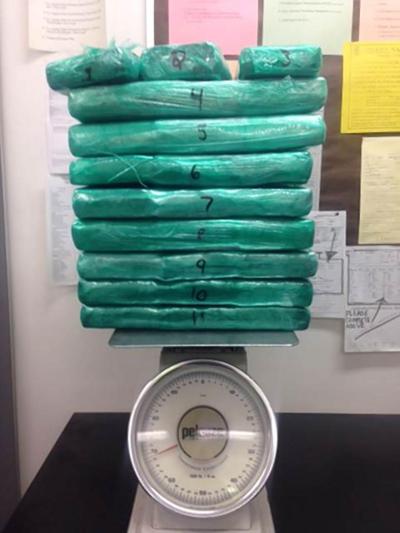 A flight attendant for Jet Blue airlines was captured and arrested by police in New York City on Wednesday after she fled Los Angeles after dropping off a bag that contained nearly 70 pounds of cocaine. Marsha Reynolds, 31, left the bag at a location at Los Angeles International Airport and then was seen kicking off her heels and racing for a Jet Blue flight to New York City.

Reynolds, who is from Queens, New York, was arrested and charged with possession of cocaine with the intent to distribute it. Upon weighing the cocaine, authorities noted that the eleven individual packages of the drug came in at 68.49 pounds with a wholesale value of around $750,000. On the street, however, at retail, the cocaine is estimated to be worth over $3 million.

Reynolds was seen arriving at a security checkpoint when she dropped her bags, removed her Gucci shoes and started running through the airport headed for the Jet Blue flight to New York City. Jet Blue released a public statement saying that the company is fully cooperating with law enforcement authorities on both coasts. Reynolds is expected to face a judge some time on Thursday in Brooklyn. She had surrendered to DEA agents at JFK International.

What little additional information about Reynolds suggests that she was on the New York University track team and was a first runner up in the Miss Jamaica World pageant in 2008. Her flight from security was on Friday when she was asked to stand aside for a random screening. It was then, witnesses said, that she dropped her luggage and made a run for it. One TSA official remarked that she was also talking on her phone in a language that he could not identify.

There was no pursuit of Reynolds as security authorities considered her left behind baggage to be more of a priority. The TSA has begun to perform random screenings of airline employees and airport workers since the December 2014 discovery that Delta Airlines baggage handlers were smuggling weapons from Atlanta to New York City.

Speculation by certain law enforcement officers is that this may not be the first time Reynolds has been a mule. They find it unlikely that someone of little or no experience would be allowed to transport almost $3 million worth of cocaine. If convicted, Reynolds could get up to ten years in prison.