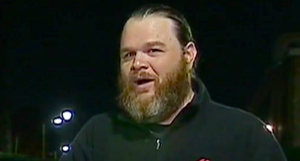 James Meyers, Jr., of Concord, North Carolina received quite the shock as the single dad drove his 10 year old daughter to school on Tuesday. He was pulled over by local police for what they said was a broken brake light. As the police were examining his paperwork, they discovered that there was a warrant out for his arrest from 2002.

It seems that Meyers failed to return the VHS movie Freddy Got Fingered back to his local video rental store. The cops returned to his car and informed him of the arrest warrant. Both Meyers and the police officers chuckled about it and the absurdity of it all. After they had a good laugh, the police officers arrested him.

The officers told him to finish taking his daughter to school and then try and locate a baby sitter for her. After that, they said, he had to come into the police station and surrender himself. Meyers took his daughter to school and then showed up and surrendered himself at the Concord Police Department. He was formally arrested and charged with a “failure to return hired property” and was transferred to the local county jail.

Having never been arrested before, Meyers, 37, found the entire experience rather unsettling. The caterer, musician and DJ stated that the jail personnel made him remove his belt and placed him in a cell. He just thought it a huge waste of everyone’s time. The crime he is charged with is a misdemeanor and he could get a $200 fine. Actor Tom Greene, who was in the movie Meyers had rented, noticed the story and offered to pay his fine for him.

Being as far back as ten years ago, Meyers says that he doesn’t remember even watching the forgettable film much less going out and renting it. And, to add insult to injury, the video store he rented it from is no longer even in business.

Meyers will stand before a judge on April 27.