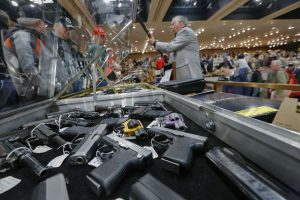 On Monday, the 9th US Circuit Court of Appeals potentially struck down zoning laws in a California county that prevents anyone from opening a retail firearms store. The 2-1 ruling upheld challenges brought by California businessmen in Alameda County who were told that they couldn’t open a gun store anywhere in that country due to certain zoning regulations and ordinances.

The majority judges stated that such ordinances and laws were possibly in direct violation of the the Second Amendment to the United States Constitution and were, therefore, probably not legal. The lawsuit against the county was brought by a trio of businessmen who were denied a permit to open a gun shop in the county because they were informed that county law forbid gun stores in the county. The zoning ordinances were not struck down by the court but the court stated that the county should have been able to present a case for why they wanted such restrictions placed on a particular industry. The lone dissenter explained that the only objection was that the case was not brought by an Alameda County resident and, rather, business interests that did not reside in the county.

Judge Diarmuid O’Scannlain wrote in the majority opinion that, “If ‘the right of the people to keep and bear arms’ is to have any force, the people must have a right to acquire the very firearms that they are entitled to keep and bear. One cannot truly enjoy a constitutionally protected right when the state is permitted to snuff out the means by which he exercises it; one cannot keep arms when the state prevents him from purchasing them.”

The decision in this matter has, by the court, been returned to the lower U.S. District Court for the Northern District of California. This challenge began when the three businessmen decided to open a gun store in 2010. The zoning law states that a gun store can’t be within 500 feet of another gun store, school, bar or residential neighborhood. They found a surveyor to check out a potential site they had scouted and they discovered, with the professional measuring, that the potential site was 532 feet away from any of the restricted properties; in this case a residence.

However, when the county came and measured, they said that the location was only 446 feet away and so the lawsuit ensued in 2012 as the businessmen felt that they were purposely being discriminated against and that it was premeditated by the state.