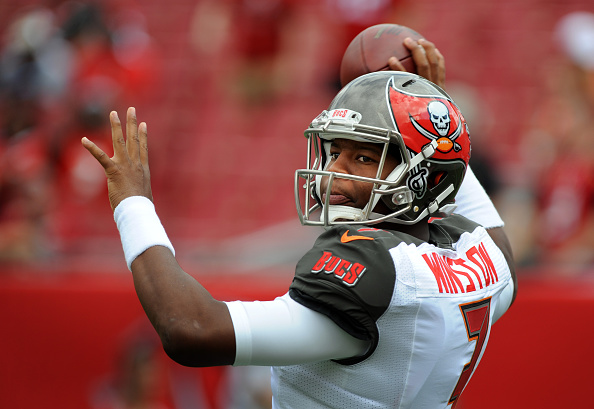 Tampa Bay Buccaneers quarterback Jameis Winston has notified CNN that he is prepared to sue if the cable network airs a documentary about college campus rape on Sunday as scheduled, according to a letter obtained by ESPN.

“The Hunting Ground” debuted at the Sundance Film Festival earlier this year. The documentary, in part, highlights the rape investigation against Winston while he was at Florida State and features the first public interview from Winston’s accuser, Erica Kinsman.

“We are writing to formally caution CNN that the portions of the film ‘The Hunting Ground’ pertaining to Mr. Winston are false and defamatory to Mr. Winston,” read the letter from Winston’s attorney to CNN, which was first reported by The Hollywood Reporter. “We urge CNN to reconsider the reckless decision to proceed with the broadcast of this deeply-flawed documentary in the face of the overwhelming evidence the film’s producers consciously and intentionally failed to adhere to any accepted journalistic standards.”

Kinsman’s lawyer responded to the letter with a statement Saturday.

“Mr. Winston is apparently in the midst of another PR battle this week due to the release of ‘The Hunting Ground’ on Sunday. When your lawyers’ letters written on Friday are somehow getting printed in the media on Saturday, it doesn’t take a rocket scientist to figure out what’s going on,” attorney John Clune said. “His latest attack is an attempt to revive his lawyers’ media themes and, as expected, shows no understanding of rape trauma and misrepresents the actual evidence. More importantly, Mr. Winston should get used to the rape allegations against him because film or no film, they aren’t going away.”

Winston was accused by Kinsman of raping her in December 2012. Winston was never interviewed by Tallahassee police or the state’s attorney’s office and was not criminally charged in the alleged incident. During a student conduct hearing, Winston declined to answer questions but read a statement declaring that he “did not rape or sexually assault” Kinsman. The judge in that hearing ruled that the evidence was insufficient to find Winston responsible for four violations of the university’s student conduct code and that he did “not find the credibility of one story substantially stronger than that of the other.”

Kinsman filed a civil lawsuit against Winston earlier this year as well as a Title IX lawsuit against Florida State.Winston has filed a countersuit against Kinsman, in which he denied her allegations of rape, sexual battery, assault, false imprisonment and intentional infliction of emotional distress.

“The Hunting Ground” received positive reviews after its Sundance premiere but since has been the target of criticism by some for being unfair. The letter from Winston’s lawyer states that the documentary omits some exculpatory evidence and “manipulates, misstates or simply omits facts to present a false narrative.” The letter also points to emails from one of the film’s producers in which she said she was “in the corner of advocacy for victims” and therefore did not see a “need to get the perpetrator’s side,” as she was not a journalist.

“The Hunting Ground” is scheduled to air on CNN on Sunday night.