John Hinckley, Jr. to be freed to live on his own in Virginia 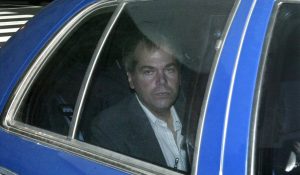 BY KEVIN SAWYER – John Hinckley, Jr. was captured and held for the attempted murder of President Ronald Reagan on March 30, 1981. He had admitted to trying to shoot the president in an effort to impress the actress Jodie Foster, with whom he was obsessed. He was found not guilty by reason of insanity and has spent the last 34 years in a psychiatric institution.

A federal judge recently ordered him to be finally released next week stating that he was being released as a “convalescent leave” situation because the has shown no signs of depression or any other psychiatric affliction or more than 20 years. He will be released in early September and will go to live in Williamsburg, Virginia with his 90 year old mother. Hinckley, Jr. was only 25 years old in 1981 when he attempted to shoot the president. Reagan was shot coming out of a hotel and was about to enter his limo. A bullet went through his lung but missed his heart and he recovered from his wound and returned to office shortly after the shooting. 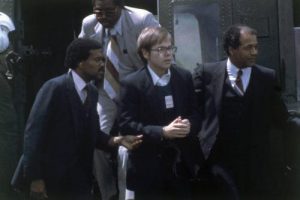 Hinckley, Jr. being apprehended and led away from the scene of the shooting on March 31, 1981.

Hinckley Jr, now 61 years old, has been gradually let out over the past decade and has visited many times with his mother since that time. As conditional to his pending release, there have been a few restrictions in place including him having to carry around a GPS location phone as well as to come back into Washington, DC on a monthly basis to be checked out and re-evaluated. He must also check in with his doctors weekly as well as join a regular support group. 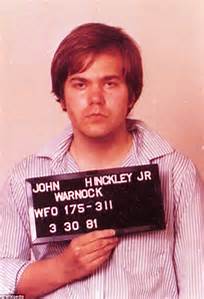 Hinckley, Jr. being booked and charged with the attempted murder of President Reagan.

Hinckley, Jr. is also required to find some regular volunteer work or a part time job. He can’t have any social media presence and is not allowed to talk with any representative of any media outlet. He is allowed to use the world wide web but is not allowed to do any searches on himself. He, also, can’t have any contact with any of the victim’s, or their families who suffered injuries, at any time. Finally, he is required to live with his mother in her gated community for only one year and then will be free to venture out on his own.

He was deeply troubled young man from a rich family in 1981. His obsession with the actress Jodie Foster has never really been explained and Foster had trouble dealing with his stalking her for many months and in the aftermath of the murder attempt. Alicia Christian “Jodie” Foster, a two time Academy Award winner, was only 19 years old at the time and a freshman at Yale.

The two time Academy Award winner, Jodie Foster, as she looked during a 1981 photo shoot for High Society Magazine. She was a 19 year old freshman at Yale University at the time.

Hinckley, Jr. was deeply in love and obsessed with her and stalked her over the course of nearly a year. He wrote a letter to her only an hour before he left for the Washington, DC hotel to shoot Reagan. In the letter he wrote:

“The reason I am going ahead with this attempt now is because I cannot wait any longer to impress you. This letter is being written only and hour before I leave for the Hilton Hotel. Jodie, I am asking you to please look into your heart, and at least give the chance, with this historical deed, to gain your love and respect.”

Sep 2, 2016Kevin Sawyer
ADVERTISEMENT
Baltimore PD operates secret surveillance program with private fundsPope Francis I declares Mother Teresa a Catholic Christian saint
Teen arrested for offering hitman services on Dark Web
By 2020, robots will replace another five million human workers
Why would the police arrest a man dressed as a tree?
Research finds 1 out of 8 people moved because their house was haunted
Here are a few things that happened last week in the rest of the world…