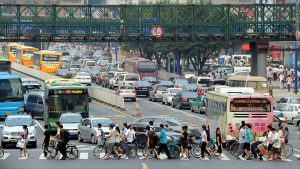 BY KEVIN SAWYER –  It is hardly an uncommon sight on the busy streets of any major Chinese city. Chinese drivers who accidentally hit a pedestrian will, then, maneuver their vehicle and turn on them in an effort to kill them. The phenomenon of killing pedestrians on the streets of China is so common that people rarely even take notice anymore. Countless security cameras have captured drivers running over a downed pedestrian multiple times and then will get out to make sure that they are dead.

The Chinese actually have a saying related to this: “It is better to hit to kill than to hit and injure”.

Apparently, the phenomenon has been going on since, at least, the early part of the 1990’s. It seems a combination of human adaptability and Chinese driving death laws that make it less expensive to actually kill some one than to inure them. According to Chinese law, if you kill someone in an traffic accident, you are only legally liable for a one time fee to the family which is, generally, in the $30,000 – $50,000 range. Once the driver has made financial restitution to the dead person’s family, the matter is closed legally.

However, if you hit someone and just injure them, then the driver is personally, and financially, responsible for the medical care of the inured pedestrian for the rest of their life. Such life long care can easily run into the millions of dollars over a lifetime.

One security camera captured a man running over an old woman five times before he decided that she was dead. There were no criminal charges for murder brought forth. The man only had to pay her family $70K and that was that. Another case involved another BMW driver. The young man hit a three year old boy and then backed over the child’s head, crushing it for good measure. He did that three times. No criminal charges were brought by the police as the driver said he thought he ran over a garbage bag.

Both the Taiwan and Chinese governments are working to change the current laws so that these hit and kill accidents no longer happen but, so far, things have remained the same.