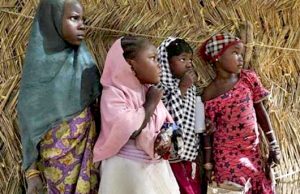 The West African Islamist extremist group, Boko Haram, has been launching its reign of terror for many years in the Lake Chad region of Nigeria and their violence and their sociopathic viciousness knows no boundaries at all. They are said to be in league with the Islamic State but the group seems only concerned with bringing fundamentalist Islam to the region through the terror of beheadings, the burning down of villages, robbery, kidnapping and the slaughter of thousands.

Now, UNICEF announces that Boko Haram has increased its use of children as bombs by ten fold from just 4 in 2014 to 44 last year. Also, UNICEF reports that nearly 80% of the child bombs are girls. The report comes on the anniversary of the brutal kidnapping of nearly 300 young Nigerian school girls by the group two years ago. Some managed to escape but most of the young girls remain missing.

Manuel Fontaine, UNICEF regional director in West Africa said, “Let’s be clear: these children are victims not perpetrators. Deceiving children and forcing them to carry out deadly acts has been one of the most horrific aspects of the violence in Nigeria and in neighboring countries.”

The horrific violence and terror being spread by Boko Haram has taken a terrible toll on Nigerian life and, especially, on the lives of all Nigerian children. According to UNICEF, thousands of Nigerian children have no parents and are just wandering about the countryside while over one million of them have been totally displaced from their villages being destroyed. In addition over 1,800 schools are no longer functioning because Boko Haram has either looted them or simply burned them to the ground. 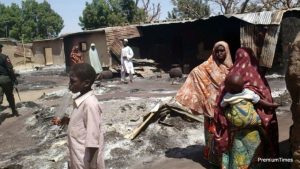 For the last year or so, the Nigerian army has been on a serious offensive that seems to be taking back many of the villages and loosening Boko Haram’s grip on the countryside. The United States has been providing assistance with intelligence gathering and three other nations have joined Nigeria in the fight to destroy the gangster militants.

The use of children as bombs has had a devastating impact on Nigerian life.

“As ‘suicide’ attacks involving children become commonplace,” Fontaine said, “some communities are starting to see children as threats to their safety. The suspicion toward children can have destructive consequences: how can a community rebuild itself when it is casting out its own sisters, daughters and mothers?”