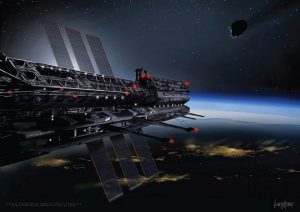 BY KEVIN SAWYER – Russian engineer and businessman, Igor Ashurbeyli, has done something rather unique in Earth history. Not only has he created a nation but his nation exists in outer space. It is called Asgardia and it will be dedicated to the peaceful exploration of outer space. And, any citizen of Earth may also hold citizenship in Asgardia. Currently, there are 369,574 citizens of Asgardia.

According to Ashurbeyli, Asgardia will exist as, “…the prototype of a free and unrestricted society which holds knowledge, intelligence and science at its core along with the recognition of the ultimate value of each human life.”

The nation has been named for Asgard, the legendary home in the skies of the Norse gods. For Ashurbeyli, it is a powerful symbol of the human desire to escape the bonds of Earth and to seek a greater life out in the universe. For Asgardians, there are no political or cultural divisions. Everyone works together for the benefit of humanity. Ashurbeyli states that he hopes to see the initial launch of a satellite followed by the building of a permanent space station home for the nation of Asgardia.

Of course, the skeptics abound as they refer to what is, apparently, space law. How such laws will be enforced is unclear but it all goes back to 1967 when the United Nations created what is known as The Outer Space Treaty. It was signed by 104 countries and it dictates how space will be governed by humans. The major points of this treaty is that space exploration is open to everyone, no nuclear weapons may be brought out to space and countries are responsible for any damage they do.The treaty insists that it will be peaceful exploration but it is absent any ideas as to how to actually accomplish that.

In addition, Ashurbeyli intends for Asgardia to join the United Nations. The other mission of Asgardia is to protect Earth from space threats such as solar flares, space junk, infection from traveling bodies, comets and asteroids and other such dangers as they may arise in the future. Ultimately, Ashurbeyli looks to develop some manner of force field that will shield Earth from such potential calamities.