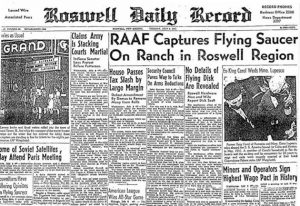 BY KEVIN SAWYER – Even after 69 years, the small New Mexico town of Roswell continues to celebrate the day a UFO crashed in their town. The craft crashed in the nearby New Mexico desert sometime between July 2-4, 1947, and every year since, Roswell has taken the first weekend in July and made it a major celebration with events and speakers who come to talk about the incident.

The day after the crash, The Roswell Daily Record ran the headline that an extraterrestrial ship had crashed on a ranch just outside of town and that the military immediately swarmed into the town to take over the investigation. Whether it was an investigation of a cover up has been hotly debated for almost 70 years. 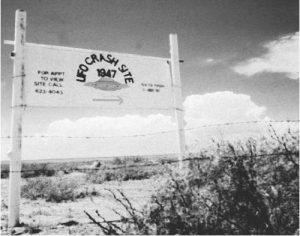 When the incident first happened, the military issued a statement that they had recovered a flying craft of unknown origin but the very next day they sent out press releases stating that all they had really found was a crashed weather balloon. In those days, just after World War Two, people believed absolutely everything their government told them. But, as the years went by and independent investigations were launched, some different information began to emerge. It all began to point to a crashed ship as well as the recovery of at least two of the extraterrestrial pilots. 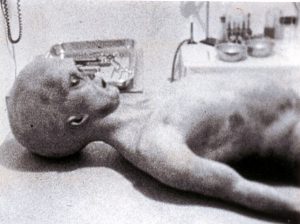 This is an alleged photo of an alleged extraterrestrial pilot found at Roswell on the autopsy table.

As more information began to leak out and more witnesses and government experts who where there come forward, it becomes more clear that the incident was, indeed, a crash. The federal government, of course, has always sung the same song of denying that extraterrestrial races have long visited Earth. The theories as to why abound everywhere.

There are even photographs of the recovered pilots that have leaked out over the years. One of the pilots, according to some sources, even managed to survive for several days before succumbing to his injuries. There are even photos of the autopsies performed on the extraterrestrial pilots. Some say they were faked, some say they were there and know it to be the truth. 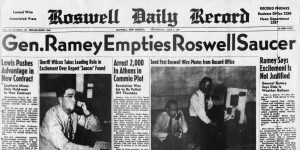 An Air Force major at the time, Jesse Marcel, had been at the crash and had collected much of the debris and had long stated that none of the material he found came from Earth. It has also been widely speculated that such human scientific advances as micro chips, fiber optics, resistors and night vision technology was the direct result of reverse engineering equipment that was on board the crashed craft.

A 25 year CIA field agent, Chase Brandon, recently revealed that he had seen a box marked “Roswell” in a special vault located in the CIA headquarters in Langley, Virginia. He would not reveal the contents but stated that the incident did, indeed happen.

“My God,” he said when he found the contents. “It really did happen.”