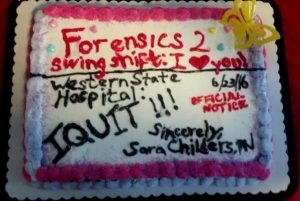 BY KEVIN SAWYER – A nurse in Washington and a TV anchor in Alaska recently quit their jobs in the most spectacular and unbelievable of ways. The nurse, Sarah Childers, had had enough of working at the Western State Hospital in Lakewood, Washington. Childers decided she would send her bosses a special resignation cake so that she could give them a piece of cake and a piece of her mind at the same time.

She quit because she said that it was a horrible place to work. She stated that the staff was overworked and underpaid as well as not having enough training to carry out their duties responsibly. She only worked there for seven months. She also claimed that the management of the hospital was always too quick to point out employee mistakes and punish them for them. She didn’t appreciate the oppressive atmosphere. She decided to truly celebrate her moving on. 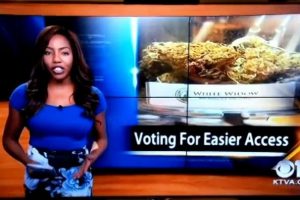 Charlo Greene, a local TV anchor out of Anchorage, Alaska, decided that she, too, needed to move on from where she was. She has long been an advocate of legalizing marijuana and wants to dedicate her efforts and her time toward trying to get pot legalized in Alaska.

Greene was torn between a job that she wasn’t crazy about but paid the bills or working at a job where she had a passion and a love for what she was doing. So, one night she was doing a story on the legalization of marijuana in Alaska when she suddenly stopped in the middle of her story and said:

“Everything you’ve heard is why, I, the actual owner of the Alaska Cannabis Club, will be declaring all of my energy toward fighting for freedom and fairness which begins with legalizing marijuana here in Alaska. As for this job, well, not that I have a choice, but F*CK IT! I quit!”

Needless to say, the TV station sent out an immediate apology to its viewers.