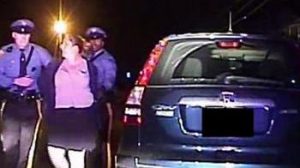 Rebecca Musarra, an attorney from Philadelphia, was arrested by New Jersey state police for obstruction of justice when she invoked her constitutional right to remain silent and not speak to the officers after a traffic stop. The entire incident was captured on the police cruiser’s dashboard camera.

Musarra told authorities and the media that the state troopers told her that if she didn’t talk to them, if she didn’t answer their questions, that she would be arrested as not talking to them, they told her, was a criminal act. The New Jersey State Police had no comment on the arrest.

Both state troopers have only been on the job for two years. When they pulled her over, the asked for her license, registration and proof of insurance. When they asked her if she knew why she was pulled over, she didn’t reply. Asking such a question is commonly asked because if the police can get a driver to admit they knew why they were pulled over, they, in effect, got the driver to admit to a crime.

She continued to refuse to talk to them and they subsequently arrested her and charged her with obstruction. They told her to get out of her car and they handcuffed her. When she asked if she was being arrested because she refused to talk to them, one the police officers said, “Yeah. Obstruction.” They then put Musarra into the police car and read her the Miranda rights which, of course, includes: you have the right to remain silent…

Musarra said she was cuffed to a bench in the holding cell and was not allowed to make a phone call. She told the police supervisor what had happened and he soon left to review the dash cam footage. He returned soon after and dropped the charges against Musarra. The supervisor told her that the officers made rookie mistakes and he apologized for the incident. The entire incident lasted about two hours.

Musarra said after her release, “Who knows what will happen to the next person who comes down the road who decides they have these constitutional rights they want to assert? There has to be some sort of accountability.”