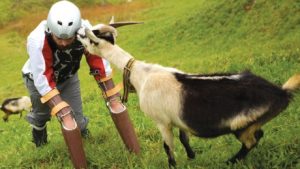 Thomas Thwaites had grown tired and weary of his humble and unemployed life in England. He wanted to, somehow, escape from his life and to, perhaps, lead another totally different and more peaceful existence. That was when this 35 year old out of work designer made the decision that he would become a goat. He would be a goat and live a peaceful life among a herd in the Swiss Alps.

This new dream came to him, he said, one day when he was walking the dog of a friend. He thought the dog looked so peaceful and without worries. He pondered that the life of a domestic dog would be what he had been looking for. He decided against that upon further contemplation because he felt there were a few things about the life of a dog that he really couldn’t do especially eat meat.

He thought long and hard about which non-human existence he wanted. He had pondered becoming an elephant but he decided against it because of their large brains. He thought that with such large brains, and obvious intelligence, that elephants were likely to suffer from many human emotional burdens and distresses such as anxiety, depression and post traumatic stress syndrome. Finally, one day, he decided that a goat’s life would be the life for him. He announced his decision to friends and family. They all, of course, thought him insane. 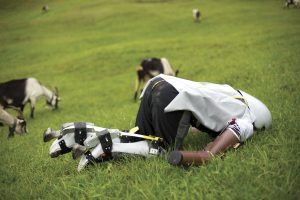 So, how to finance this new life being unemployed and all? He applied for a research grant from an organization called the Wellcome Trust. In his application he wrote that he wanted to “experience the non-human condition and to live a calmer and simpler life immune to the worries and frustrations, the existential terror, of everyday life.”

He got the grant and now began his goat life in earnest. He found a company that made him a special helmet and prosthetic arms and legs so that he could be less human to the goats and be able to walk on four legs like them. He also got a company to invent his a special internal organ type of thing so that he could more efficiently digest grass; something human stomachs were not designed to do.

He got a goatherd in Switzerland to allow him to join his herd after much convincing. At first, he said, life as a goat was much harder than he had ever expected and he fell down a lot trying to navigate the rocky slopes and hillsides and it was hard to live an exposed life out in the elements. Plus, he had to eat nothing but grass all day. Also, the herd didn’t seem to like him much. They avoided him and a few times he thought the males of the herd were set to attack and kill him. 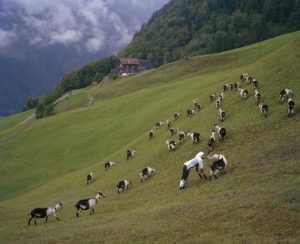 He stayed with it, though, until one day, a female just up and decided she would befriend him. She would follow him around and the rest of the herd began to have a more tolerant outlook toward him. He became an accepted member of the herd. He is firmly against what many declare is human evolution and that we will become cyborgs. Thwaites thinks that is not the way to go as many would rather choose to de-evolve and go in the opposite direction. He has written a book about this great adventure entitled: “Goatman: How I Took a Holiday From Being Human”.

“I learned something important,” Thwaites said, “and that is that even goats have a hard life and need to fight for their existence. Everyday was tough and that is something that is just part of being alive. Goats live much more in the moment than we do. That shows us that we really need to learn to be a bit more relaxed about life.”