Kevin Bacon just celebrated his 27th anniversary of marriage with his wife Kyra Sedgwick. The pair married in 1988 after starring together in the film “Lemon Sky”.

In honor the their wedding anniversary this week, he posted a few throwback photos. 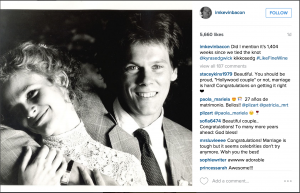 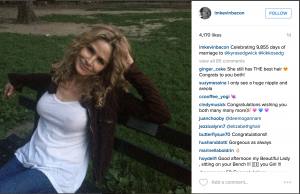 On April 3, 1988, the couple’s wedding announcement appeared in The New York Times, declaring the well-to-do Sedgwick’s impending union with some Philly actor:

“Mrs. Ben Heller of New York and East Hampton, L.I., and Henry D. Sedgwick of New York and Stockbridge, Mass., have announced the engagement of their daughter, Kyra Minturn Sedgwick, to Kevin Bacon, a son of Mr. and Mrs. Edmund Bacon of Philadelphia.”