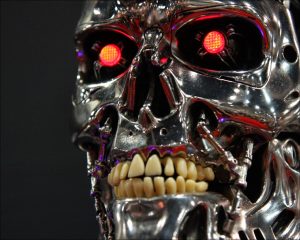 As the Pentagon continues its never ending search for new and higher tech weapons, speculation has begun to swirl with regard to how close they might be to actually building Terminator type warrior robots for the battlefield. Drones and robotic technology systems are already fully integrated into today’s modern military and it seems only inevitable that robot warriors will make their frightening appearance.

On Wednesday, the Pentagon held a news conference in which they unveiled new military technology that has been completed and is still in the planning stages. Some of the initiatives that the were revealed were the potential for a fully robotic navy and an F-16 fighter jet that will fly itself. The F-16 plan calls for a program that has been named “Loyal Wingman” and the self piloting fighter will fly next to a piloted F-35.

For now, the Pentagon wants to build machines of war that will still have a human component to them. They don’t want the machines to kill without the input of a human controller.

“We might be going up against a competitor,” said Deputy Secretary of Defense Robert Work, “that is more willing to delegate authority to machines than we are, an as the competition unfolds, we will have to make decisions on how we best can compete.”

What really seems close at hand, hinted Work, is a robot navy. He talked about submarine and surface ship technology that will soon revolutionize naval warfare. Also, firms like Google have already begun developing driverless vehicles so that the army can have unmanned convoys traveling even into the most dangerous of battle conditions.

Micro drones have been under construction for some time as the Pentagon has thrown over $70 billion at the project already. The micro drones are built with parts created on 3D printers and they are designed to swarm the enemy with the overwhelming force and power of sheer numbers. The micros will be launched from fighter jest and have the capability of reaching their targets even when winds are fierce. In line with the drones, planners are already nearing completion of tiny bombs that will have cameras in them so they can actually see their targets.

Finally, the Pentagon revealed that it is nearing completion on what they call a hyper velocity gun. This weapon is electromagnetic and can deliver a rocket or missile from over 4,000 miles away traveling at a speed of upward of 5,000 MPH. Artificial intelligence, too, has long been on the front burner so how long before there is a real Terminator style battlefield robot?

Even physicist Stephen Hawking was quoted as worrying that independent and self thinking battlefield machines will be revealed in only a matter of a few years and not decades.