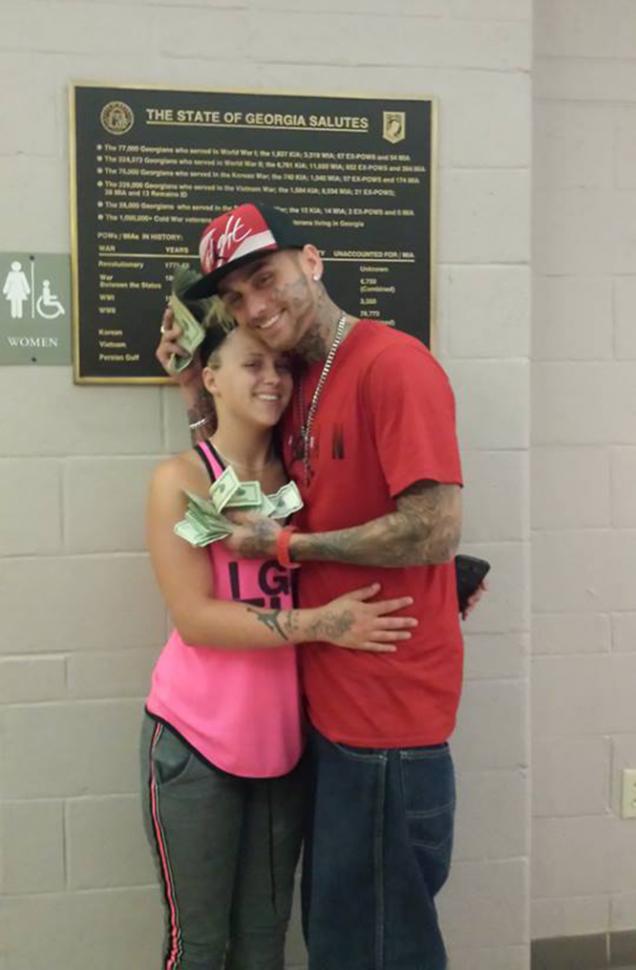 Photo Courtesy of Inside Edition

A couple was busted for allegedly robbing a bank after posting photos of their loot to Facebook, according to a police report.

John Mogan, 28, and his girlfriend Ashley Duboe, 24, were charged with robbery for the heist at the Savings Bank in Ashville, Ohio on August 24.

Mogan allegedly walked into the bank wearing a hooded sweatshirt and gave the teller a note demanding cash, and the teller did as told.

Mogan’s mugshot and Facebook photos show he is heavily tattooed with ink across his face including the phrases “Loyalty’s Thin” and “Betrayal’s Thick.” But authorities allege that Duboe applied makeup to his face and neck to cover the tattoos before the robbery, according to The Smoking Gun.

Police say that four days after the robbery, the couple posed together with cash in their hands. On August 31, Mogan also posted images of him posing with a wad of cash in his mouth.

After the robbery, cops followed up several leads but none of them led to the thieves. But a tip received by Central Ohio Crime Stoppers led them to Mogan and his photos, according to The Circleville Herald.

Mogan and Duboe have each been charged with robbery and theft and are behind bars at the Pickaway County jail on $250,000 bond.

Mogan waived his right to a preliminary hearing in court on Wednesday, the Herald reported. No date has been set for a grand jury and the robbery is still under investigation, police said. Lawyers are not listed for the pair.

The Bull Dykes are just going to LOVE her when she gets to the Joint.