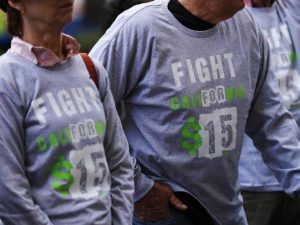 A tentative agreement has been reached by the California state legislature that will likely raise that state’s minimum wage to $15 an hour. If passed and made law, it would be the highest minimum wage in the country. Democrats in the California legislature tried to put a similar bill through last year but it never made it. By coming to a compromise bill, politicians believe it can become law without sending it out to be voted on by the people.

Most of the compromise plans, even those backed by the unions, will have the minimum wage jumping one dollar every year for the next five years until the $15 per hour wage is reached. According to the Los Angeles Times, which originally broke the story, the $15 an hour minimum will be reached by 2022. It also indicated that small businesses with fewer than 25 employees would have until 2023 to reach the new minimum for their employees.

Currently, Washington DC leads the nation in minimum wage at $10.50 and hour followed closely by both California and Massachusetts at $10 an hour. Movement has been afoot all across the country in many states to boost the minimum wage. Pressure from unions and workers, especially those in the fast food industry, have been pressing the corporations and the politicians quite hard the last few years.

Quite a few states have already bumped minimum wages for state workers and Seattle, too, has increased its minimum wage to $15. The state legislature in Oregon recently passed the initiative and it will all kick in there within the next 6 years. Both Los Angeles and San Francisco already have $15 an hour minimum wages and New York and Washington state are not far behind in presenting proposals and legislation.

According to research at the Berkley Institute for Research on Labor and Employment, the pay increase will affect nearly 40% of California’s entire workforce. They state that the average worker will see an increase of around $4,000 a year. These moves have been in direct conflict with what has been going on for years in most of the country. Individual states are setting state minimum’s and crushing any attempts by any of their cities and towns to raise their minimum wages. In addition, those state governments that crack down on attempts by individual cities and towns to become more competitive, almost never consider trying to make their state’s more business friendly with regard to fewer regulations and higher wages.