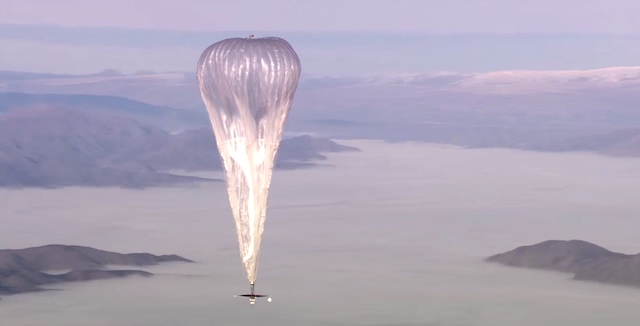 The entire island nation of Sri Lanka will soon get internet service – all of it beamed from balloons – thanks to a contract with Google to create internet connections in the sky.

Google’s Project Loon uses a network of 13 giant balloons, riding air currents, to deliver smartphone-based internet service to the people below. This will allow all 21 million people living in Sri Lanka to be able to access the internet through their smartphones or tablets, just as those devices would connect to a cell tower.

Google created the project to deliver cheap internet to remote and inaccessible parts of the world where running cables and fiber optics are impractical or too expensive.

Each balloon can stay aloft for 100 days and can fly twice as high as commercial airliners. Google said they can build each balloon in a matter of hours and launch 12 per day with a single crane. They eventually plan to have thousands of the balloons in the air at a time, covering remote corners of the world from the Arctic to Australia.

Project Loon originally tested this idea in New Zealand in 2012, but Sri Lanka will be the first place the project delivers internet to when it goes online within the next few months.

Aug 2, 2015Chris Carvello
ADVERTISEMENT
World’s Largest Free Kitchen Feeds 100,000 Daily Inside a Golden TempleDeadpool Movie Trailer Trailer
Teen arrested for offering hitman services on Dark Web
By 2020, robots will replace another five million human workers
Why would the police arrest a man dressed as a tree?
Research finds 1 out of 8 people moved because their house was haunted
Here are a few things that happened last week in the rest of the world…