There is a new initiative in the works to deal with air pollution in China. Step one begins in Zhangjiakou in the northwest of Hebei province–recently approved as the country’s first renewable energy pilot zone. 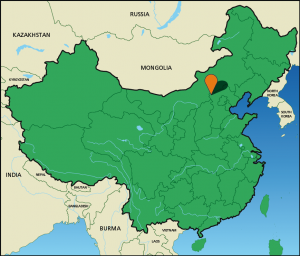 In 2022, Zhangjiakou hopes to host the Winter Olympic Games. It’s currently in the running with neighboring Beijing (and the host will be named on Friday). Even more so, it hopes to power 55 of its electricity demands with renewable resources.

Zhangjiakou has abundant wind, solar and biomass resources. If the city wins the bid, to establish a world leading “low-carbon Olympic zone”. All olympic venues would be powered 100 percent by renewable resources according to the city’s deputy mayor.

40 percent of industrial enterprises would give zero emission.

Back in 2014, the International Renewable Energy Agency (IRENA) put together a road map citing China’s promise in the area of renewable energies.

It demonstrated on the whole of China and seemed optimistic.

“While countries must make energy decisions based on their own circumstances, each decision needs to be based upon the most comprehensive and transparent data available. China has demonstrated that it possesses the technical and human resources, as well as the dynamism, to spearhead a transformation of global energy use. REmap 2030 suggests concrete pathways to be considered to meet this generational challenge: to attain a clean and secure energy system in China and for the world.”

Jul 29, 2015Stephanie Burton
ADVERTISEMENT
Renewable Resources: Germany sets national recordKimmel moved over inhumane hunting of Cecil the Lion
Teen arrested for offering hitman services on Dark Web
By 2020, robots will replace another five million human workers
Why would the police arrest a man dressed as a tree?
Research finds 1 out of 8 people moved because their house was haunted
Here are a few things that happened last week in the rest of the world…