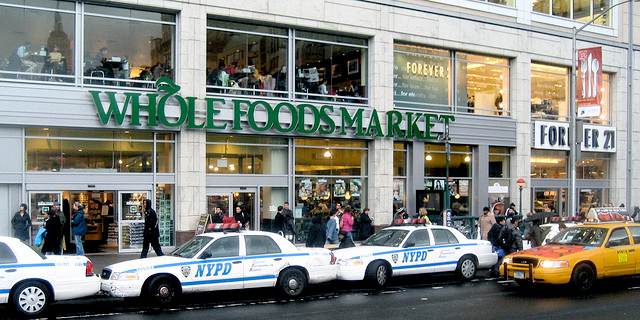 It was the story that, over the summer, ushered in a season of discontent with the grocery store chain nicknamed by its critics “Whole Paycheck”: the accusation that Whole Foods had overcharged some New York customers for, among other items, produce and pre-packaged fresh products

“Straight up, we made some mistakes,” co-chief executive Walter Robb said in an online video that introduced a price-auditing system. “We want to own that and tell you what we’re doing about it.”

But the saga did not end there. Now, Whole Foods and New York City’s Department of Consumer Affairs (DCA) have announced that the grocery chain will settle with the city for $500,000 – but issued dueling news releases about what the settlement means for consumers.

“After discovering the troubling and repeated mislabeling of pre-packaged goods at Whole Foods last year, we are happy to have reached an agreement with Whole Foods that will help to ensure New Yorkers are better protected from overcharging,” DCA Commissioner Julie Menin said in a statement “Whether it’s a bodega in the Bronx or a national grocery store in Manhattan, we believe every business needs to treat its customers fairly and, with this agreement, we hope Whole Foods will deliver on its promise to its customers to correct their mistakes. DCA will also continue its vigilance in making sure New Yorkers are protected every time they check out at the grocery.”

As explained by the DCA, the agreement requires Whole Foods to:

Whole Foods, however, was less sanguine about the agreement, saying it is only paying to move on.

“While WFM refused to consider the DCA’s initial demands of $1.5 million, we agreed to $500,000 in order to put this issue behind us so that we can continue to focus our attention on providing our New York City customers with the highest level of quality and service,” the company said in a statement.

“Unfortunately the DCA has misrepresented this agreement,” the company said. “WFM has had in place preexisting pricing and weights / measures programs including a third party auditing and training program and a 100 percent pricing accuracy guarantee that gives customers a full refund on any item inadvertently mispriced. These are pre-existing programs that go above and beyond the DCA’s requirements. Furthermore, the DCA’s allegations of violations on weighted/measured items were limited to New York City, and as our joint agreement states, there was no evidence of systematic or intentional misconduct by anyone in the Northeast region or the rest of the company.”