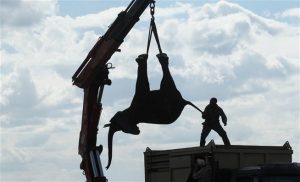 BY KEVIN SAWYER – There is something going on in the African nation of Malawi. This week, elephants were seen being tracked down by helicopters, drugged, and loaded onto large flat bed trucks. The elephants, all 500 of them, weigh up to five tons each and the only way they could be loaded onto the trucks was with huge construction cranes. 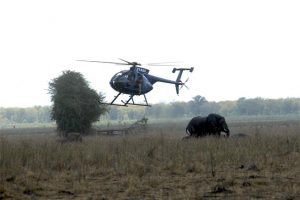 It is all a part of the African country’s plan to try and save the African elephant. They are, currently, a severely endangered species. The government of Malawi has decided to move 500 of the elephants to a secure wildlife area where they will be less threatened by human hunters and will have less interaction with human villages.

The scale of the operation, say Malawi authorities, has never been seen before. No one has ever tried to locate so many of these magnificent beasts at one time. Hunters kill the male elephants and then cut out their ivory tusks that are then sold on the black market for tremendous amounts. Because of this, the male population has been so depleted over the years that it has begun to greatly affect surrounding villages everywhere on the continent. 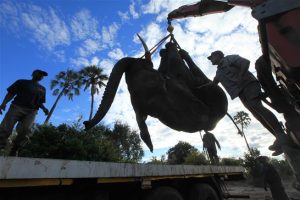 Because of the depletion of adult males, the teenage males have begun to run amok. Being teenagers and all, they can get out of control as they begin to feel the oncoming of adulthood. Because there are so few adult males left because of the poachers, there are no adult males around to keep the teenagers in line. As a result, the teen elephants storm into villages and destroy homes and crops. It has become a huge problem in many African nations.

They are moving the elephants about 185 miles away to a newly created sanctuary and wildlife park. The wildlife handlers cover the elephants eyes with their enormous ears so that the sunlight doesn’t hurt them and then stick small twigs into the ends of their trunks so that their breathing passages will remain open and clear and then then they lift them, upside down, and gently place them onto the flatbed trucks.

The area to which the elephants are being moved has no elephants left in it because of hunting and poaching. About one hundred years ago, there were several million African elephants on the continent. Now, there are less than 500,000 of them left in the wild.