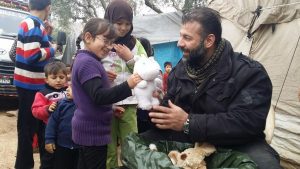 BY KEVIN SAWYER – He has become widely known as the “Santa of Syria” as Rami Adham, 44, has been risking his life to bring toys and joy to the devastation that is the city of Aleppo. The city is Syria’s largest and it has been under constant attack for the last four years of the six year civil war that has been raging in the country. 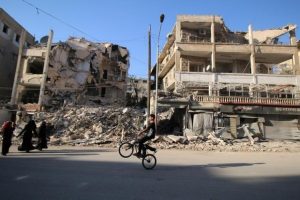 Adham is a native Syrian born and raised but in 1989 his family moved to Finland. He says that he simply could no longer just stand by and do nothing as his beloved homeland is being torn apart. So, when the civil war began in 2012, he risked everything to smuggle food, medicine and other supplies into the city. Then, one day, his young daughter told him that she wanted to give all of her toys to the children of Aleppo. Adham accepted her offer and so the legend of Syria’s Santa began. 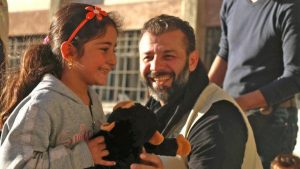 When he saw the joy and the tears on the faces of the children, he decided that toys would be his first priority. Based in Helsinki, Adham has risked life and limb 28 times so far to deliver toys to the children of Aleppo. He began crossing over into the country from Turkey but that is no longer an option as that whole entire area has been shut down for the most part.

So, now, he finds an obscure place to cross the border and, with 100 pounds of toys in a bag slung over his shoulder, he carefully walks his way into Aleppo. Not only does he have to avoid being killed by either of the opposing sides in the war but be recently learned that he is at the top of the Islamic State’s most wanted list because of his efforts to bring toys to the children. 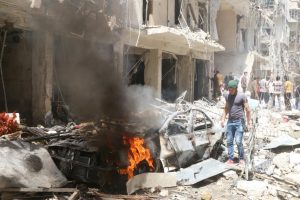 Adham, a father of six, brings at least one thousand toys with him on his back during every trip into the city. He brings everything from Barbies and action figures to stuffed animals and valued teddy bears. All of the toys are donated from Finland. In addition, he has a GoFundMe campaign going in which he looks to raise money to begin building schools all across the country. 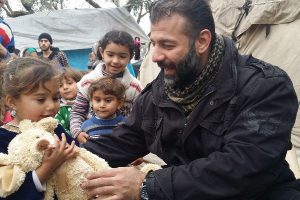 Adham, for the most part, is overwhelmed by the gratitude of the children as he said that, “I can’t describe the emotions of the kids. It’s something as if they’ve got a new friend that can only be their friend. In these times of heavy bombings there is nothing much we can do. At least we can bring some joy to these kids.”

He adds that, “Kids just keep coming up to me and saying ‘You see all these toys I have? These are all from you’. It’s beautiful…”