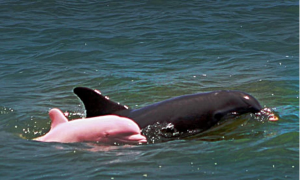 Pinkie, the rare pink dolphin that has made a few mysterious appearances in the waters of Louisiana since 2007, was spotted and identified as female by a boat captain this past month.

Charter boat captain Erik Rue became fascinated with Pinkie since he first saw her in 2007. After following Pinkie and taking multiple pictures of her, he finally found her while she was mating, letting him document the process and discover her gender.

Pinkie has become a local celebrity over the years; visitors take trips on Rue’s boat in hopes to see the infamous pink dolphin.

There is a freshwater species of dolphin known for their naturally pink color, known as the Amazon River dolphin, but the World Wildlife Fund has yet to confirm that Pinkie is connected to this species.