BY KEVIN SAWYER – On Monday, police in Miami shot a therapist who was trying to help a severely autistic patient who had wandered away from his treatment facility and was sitting in the middle of the road obstructing traffic. Charles Kinsey, who works as a behavioral therapist at a group living facility, was sent out to retrieve the 23 year old autistic patient.

Suddenly, police arrived responding to a 911 call in which the caller told police that there was someone with a gun who was threatening to kill their self. North Miami police showed up on the scene and approached the two men with assault rifles. Eyewitness accounts, as well as cell phone video footage, captured the scene. As soon as the police arrived with their assault rifles, Kinsey went immediately to his back and raised his hands. He told the police what was going on and that neither of them was a threat.

The police didn’t respond well to the situation. Kinsey called out to the police, who were taking cover behind telephone poles, that the autistic man just had a toy truck in his hands and that it was safe for the police to approach them.

“That’s all it is,” shouted Kinsey. “There is no need for guns.”

That was when the police shot him with one of the bullets ripping through Kinsey’s leg.

Later, Kinsey told reporters that,” I figured that as long as I had my hands up, they wouldn’t shoot. Wow, was I wrong!” 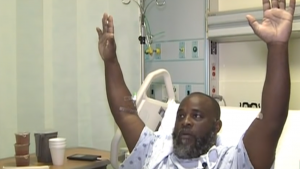 Charles Kinsey explains what happened from his hospital bed

After shooting him, the police went over to him and handcuffed him and left him lying in the street bleeding for nearly a half hour. The police had no real reply to what happened and Kinsey’s lawyer called the situation “shocking”. No one had an explanation for the 911 caller who said that someone had a gun and was threatening to commit suicide. When Kinsey asked the cop who shot him why he shot him, he said the cop told him, “I don’t know.”

Kinsey was repeatedly telling the police officers who he was and what was going on but they didn’t seem to understand. They kept yelling at the autistic man telling him to get down and show them his hands. All the autistic man did was gurgle some sounds and play with his toy truck.

Kinsey is recovering from his wounds and his attorney intends to move forward with civil, and possibly, criminal complaints.