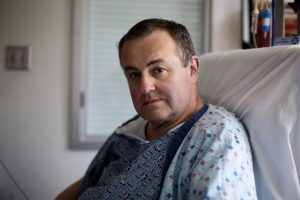 A Halifax, Massachusetts bank courier became the first man to receive a successful penis transplant performed in the United States. Thomas Manning, 64, had his penis previously removed due to cancer. The penis had been donated from a deceased man and the operation took surgeons around 15 hours to perform.

On Friday, Manning was feeling good and experiencing no pain. He said that, “I want to go back to being who I was.”

Doctors who performed that surgery are cautiously optimistic and believe that it will be a success in the long term. The operation was done at Massachusetts General Hospital in Boston. Doctors say that Manning will be able to urinate through his new penis in a few weeks and should return to normal sexual activities a few months after that.

Manning hasn’t actually looked at his new penis yet and wants people to know that there shouldn’t be any shame or any stigma attached to genital types of cancers. Doctors at Mass General are looking to perform another transplant soon and doctors at Johns Hopkins hope to do one on an Army veteran. The operations will be performed when donors can be found.

The surgeons involved have done the operation for free and Mass General is picking up the tab on the $75,000 operation. This is only the third penis transplant operation ever attempted anywhere in the world. One was tried and failed back in 2006 in China and the second one was in 2014 in South Africa and the man who had the transplant later fathered a child.

The major focus of the American penis transplant program is on war veterans who are returning with severe genital injuries. These are young men in the prime of their lives who hope to start families and can’t even properly go to the bathroom. The emotional damage and trauma can be devastating, doctors say, and the hope is this procedure will reinvigorate many lives.

The surgeons who have pioneered the procedure hope to soon train military surgeons in the techniques. They want to ensure that the operation will be successful all of the time because they don’t want the wounded vets to undergo any more trauma than what they have already experienced.