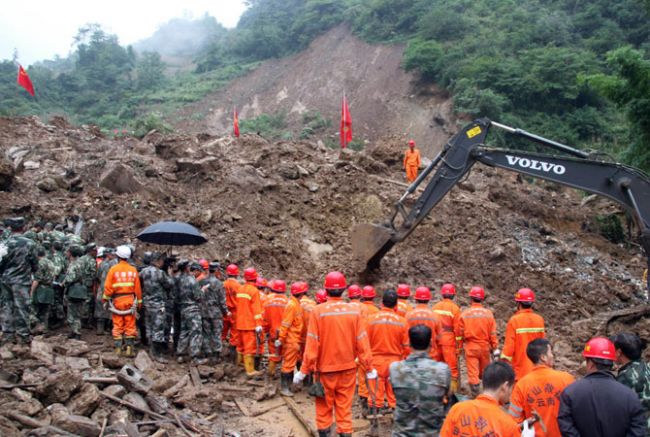 At least 91 people were missing Monday, a day after a massive landslide buried dozens of buildings when it swept through an industrial park in the southern Chinese city of Shenzhen.

The official Xinhua news Agency said the landslide buried 33 buildings in the industrial park in Shenzhen, a major manufacturing center in Guangdong province across the border from Hong Kong.

Xinhua said that as of Monday morning, 59 men and 32 women were missing in the landslide.

Shenzhen’s public security bureau posted a notice online Monday saying that at least 59 people were missing. No deaths were reported.

Li Yikang, the deputy secretary general of the Shenzhen city government, said at a televised news conference that more than 900 people had been evacuated. He said that nearly 1,500 people were involved in rescue efforts.

State broadcaster China Central Television, or CCTV, said that there was a residential area next to the industrial zone, and that the buildings buried included two workers’ dormitories.

Ren Jiguang, the deputy chief of Shenzhen’s public security bureau, told CCTV that most people had been moved to safety before the landslide hit.

The Beijing Youth Daily, citing a local resident, reported that the soil that slid down onto the area had been piled up against a 100-meter (110-yard) high hill after being dug up in the past two years in construction work.

State media carried photos of what looked like at least one five-story building leaning over and partly crumpled in the industrial park, and a sea of brown soil covering a vast area around it.

Dec 20, 2015Chris Carvello
ADVERTISEMENT
Speaker Ryan unconfirmed for second termOff-Duty Baltimore Cop Kills Robbery Suspect Brandishing Toy Gun
Teen arrested for offering hitman services on Dark Web
By 2020, robots will replace another five million human workers
Why would the police arrest a man dressed as a tree?
Research finds 1 out of 8 people moved because their house was haunted
Here are a few things that happened last week in the rest of the world…