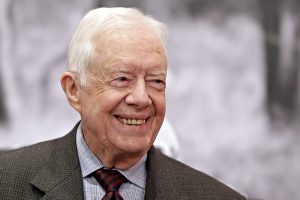 90-year-old former president Jimmy Carter has publicly stated that he will receive radiation treatment for melanoma, a type of skin cancer, on his brain. He was recently treated for liver cancer, and thought that the cancer was confined there. However, an MRI scan showed that the cancer had spread.

President Carter, a Democrat from Georgia, was the 39th President of the United States. He was elected in 1976, and served as the 39th from 1977 to 1981. Notable events of his presidency include the Iranian hostage crisis and the U.S. boycott of the Moscow Olympics.

Carter has been highly active in public work projects since his presidency.

The former president stated that it is likely doctors will find cancer in other parts of his body. However, he described himself as “surprisingly at ease.”

“I’ve had a wonderful life,” he said. “I feel very good. I have had no pain or debility.”