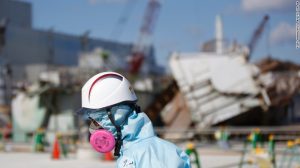 BY KEVIN SAWYER – The government of Japan has announced that it is building a gigantic underground wall of ice to surround the still leaking nuclear power plant at Fukushima. The radiation leaks and the contamination of underground water, to say nothing of the radioactive waste that has been dumped into the Pacific Ocean, has been horrific in the wake of the meltdown.

Five years ago, Japan was hit by a huge earthquake that generated tremendous damage as well as triggering a 45 foot ocean tsunami that destroyed the three reactors at Fukushima and caused them to melt down. Now, surrounding groundwater continues to make its way into the destroyed reactors which is decaying the structures as well as stopping workers from getting to the damaged, and still highly radioactive, reactors.

The radioactive rods in the destroyed reactors are contaminating the ground water to the tune of 40,000 gallons a day. The flooded chambers have prevented workers from even being able to locate the reactors which had melted the steel floors underneath them and have disappeared. No one really knows where the spent fuel rods are despite using robots to go into the damaged area to search.

The underground ice wall, which will cost $320 million, will be a mile long and one hundred feet deep. The wall is designed to keep the ground water out as well as contain the contaminated water from continuing to flow out into the Pacific Ocean. There are, of course, the critics who say it will ever work. In fact, recent typhoons have already partially destroyed the wall. The other challenge seems to be how to get rid of the huge amount of already contaminated water.

In addition, there are so many holes and cracks from the destruction that the wall itself just may not be able to prevent all of the water from getting in or getting out. Since the meltdown in 2011, both the private contractor being paid to clean up the disaster, Tepco, and the Japanese government, have been lying to the public and playing down the truly horrific effects of the contamination and the danger it poses to the world.