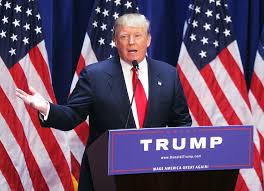 Presidential candidate Donald Trump has asked the FBI to investigate a threatening tweet he received on Twitter after he used the social network to bash Mexican drug lord El Chapo, who recently escaped from prison.

The tweet came from user @ElChap0Guzman, originally in Spanish, reads: “Keep [f******] around and I’m gonna make you swallow your [f******] words…” It was not clear who owns the account, but Trump is not taking the threat lightly.

The presidential candidate has been tweeting about El Chapo’s escape to strengthen his claims on immigration and border security.

Trump’s last tweet published July 13, 2015 about the drug lord stated: “El Chapo and the Mexican drug cartels use the border unimpeded like it was a vacuum cleaner, sucking drugs and death right into the United States.”

In a statement to the press on Monday, July, 13, 2015, Trump said “I’m fighting for much more than myself, I’m fighting for the future of our country which is being overrun by criminals. You can’t be intimidated. This is too important.”

Trump Attacks McCain Over His Capture In Vietnam - Hip Daily

[…] Trump had already garnered quite a bit of controversy, which you can read about here, here, and here, but this has crossed a […]

[…] comes after Donald Trump’s offensive remarks regarding Mexican immigrants, as well as his El Chapo incident. Not to mention his campaign promotional photo with Nazi soldiers in the background. Trump’s […]