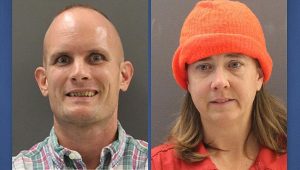 Randall and Jennifer Skates were arrested last month in Prescott, Arizona for squatting in an unoccupied mansion worth nearly one million dollars. When they were hauled before an Arizona judge, they began to immediately read from a Bible they had brought with them. In the Bible, they claimed, was proof that they were actually one person but who has two separate brains. That, they claimed, was how they would be able to talk to one another if they were sentenced to prison time.

The house they had moved in to and declared was theirs, is actually a bank owned property. Randal, 37, and Jennifer, 45, also went on to tell the judge that the Arizona court had no jurisdiction in their particular case. To justify their claim, they began to quote concepts expounded by the so called “sovereign citizen movement.” While both said they were not members of the movement, they seemed extremely familiar with the movement’s beliefs and political outlook.

The Skates had previously filed a deed for the property in which they were squatting and, apparently, believed the house to be theirs because they had properly filed the document. They declared that the court they stood in had no jurisdiction in their particular case because the flags in the courtroom were trimmed with gold fringe. This, they claimed, actually made the court a maritime court and, thus, had no jurisdiction over them. Also, because the court documents had typed their names using all upper case letters, the Skates charged that it was not possible to identify them properly because of that.

Their arraignment proceedings should have been a quick affair. Besides the Bible readings and the maritime court dispute, they also questioned the language the judge was speaking in. They said that it sounded to them like English but couldn’t be sure. At the hearing last week, Jennifer asked is she could talk to her husband who was being held on $20,000 bail. She told the judge that they were one entity with two brains and that communication between them was critical to their survival. The judge denied her request and the prosecution asked the judge to consider if the pair should still be allowed to represent themselves in the matter.

They have both pleaded innocent to the charges.